It was a busy July.

At the end of the month, I flew to LAX on my way to Carson, California and the 10th iteration of the CrossFit Games.

Once again I was hired by CrossFit Media to work as a sideline reporter and athlete interviewer for ESPN's coverage of the event.

I was responsible for covering the Masters Men, Teenage Boys, and Teams competition, which included 4-time individual men's champion, Rich Froning. His team, CrossFit Mayhem, successfully defended their title from 2015 in dominating fashion, so I interviewed them quite a bit over the weekend.

I was there Monday the 18th to Monday the 25th and worked 12-14 hour days from Tuesday to Sunday. Although the days were long, my broadcast responsibilities had a number of built-in breaks where I could relax and seek shelter from the oppressive California sun.

It was a blast working with such a fun-loving, hard-working crew. Here's a picture of all of us after the final event on Sunday (Yes, I am the only one holding a beer. It was a stressful week, okay?) 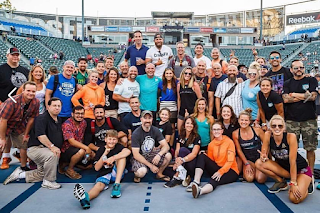 My work on the sideline and in the interview area was well-received by my co-workers and I will post a selection of clips from the week in next month's post.

August 3rd marks my one-year anniversary at Global and the last 12 months have absolutely flown by. I am really enjoying my time at Global and I'm very happy with how the move has positively impacted my media career.

This past weekend, I had two more sports anchoring shifts. I am really starting to get the hang of writing, cutting, and presenting highlight packages for a variety of sports. Here's my cast from Global Toronto yesterday evening.