Last week I had the opportunity to once again work for CrossFit Media as a sideline reporter for one of their regional competitions.

It was an exciting competition and I conducted over 30 live interviews throughout the weekend. It was great to flex some sideline reporting muscle again. I even had the opportunity to interview the champion of the 2015 Reebok CrossFit Games, Katrin Davidsdottir from Iceland, a number of times. We had a good rapport, evidenced by this tweet. 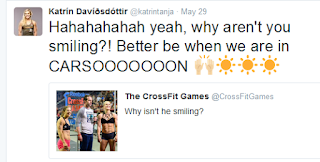 At Global, it sure has been nice to deliver weather forecasts that people actually enjoy! The warm weather is here to stay across the country. Speaking of warmer weather, beach season is now here, too. And my beach body was a topic of conversation during the anchor chat on Global Winnipeg.