I write this monthly update while watching coverage of the Canada Day celebrations in Ottawa and the Nation's Capital is just getting hammered with thunderstorms. The rain has turned portions of Parliament Hill into a lake, but there are still thousands of Canadians in attendance celebrating this great country.

Speaking of rain, the start of June saw me take part in the Ride for Heart charity bike ride with a few of my Global colleagues. I last took part in a similar ride back in 2014. That was a 60 km sojourn through the Oak Ridges Moraine. The Ride for Heart traversed the DVP in Toronto and it was a 75 km total ride.

It was the farthest I've ever biked in one day. It also poured rain from the minute I first got on the bike until I got off three hours later. Here is a fake smile I mustered around kilometre 71. 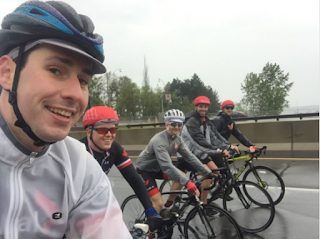 Baseball-wise, I am feeling my age. I am the oldest pitcher men's team I am playing on and my pitching stamina is attesting to that fact. I am throwing harder than I ever have, but I can only throw for an inning at a time. Every first inning I've thrown this year has been a clean inning with no runs allowed. Twice I've tried to come back out for a second inning and I get hit around.

It's odd because I used to be a guy who could throw 8 or 9 innings at a time. But I suppose that's to be expected after not picking up a ball for six years.

Tennis is going much better. I took the second lesson of my life last month and it's made a marked difference in my ground strokes. I am hitting with a crispness that I've never had before. Hopefully, I can keep it going for the rest of the season.

At Global, I have a few morning show shifts coming up this month, which is always a blast, and a nice of change of pace from my normal schedule.

Here's a short clip from Global Durham at the end of June.

Be sure to tune in!
Posted by Mike Arsenault