Well, the summer has gone by quickly once again. I mentioned a few months back that, since retiring from baseball, my two new sports are golf and tennis. Here's a quick progress report before I get into the Global stuff.

Golf - It's a terrible, terrible game. Why is it so hard to be consistent? I have somehow gotten worse since the start of the year. I also don't play enough, which is definitely part of the problem. Mark Twain was never more correct than when he said 'Golf is a good walk spoiled.'

Tennis - Things were MUCH better on the tennis front this year. This is my third season playing and my regular opponent is the friend who got me into the game. He and I were on the same floor in first-year university. When I moved back to Toronto, he and I reconnected and we started playing tennis.

We have played over 50 matches against each other and he has won every single time. In fact, he won every single set. Until a couple weeks ago. I took sets off of him in consecutive matches--I still lost the matches--but that's tangible proof that my hard work is paying off.

Also, I joined a tennis club this year and, last Saturday, I won Central Tennis Club's 'B' division championship. Here's photographic proof of me with the spoils. 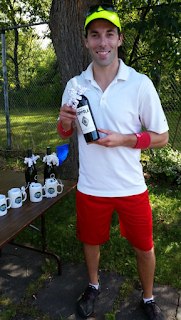 Wednesday and Thursday - 10 p.m. newscast for Winnipeg, Regina, Saskatoon, and 11 p.m. for the Okanagan Valley

Saturday and Sunday - 10 p.m. newscast for Winnipeg, Saskatoon, Regina and the Maritimes, 11 p.m. for Toronto, Montreal and the Okanagan Valley