The last time I wrote a blog post of this nature was on January 31 2013 when I left The Woodstock Sentinel-Review for my job at The Weather Network.

(Quick aside: it's pretty cool to go back and read the article and see how far I've come in just 2.5 years. Back then, I was excited to just get paid to be on TV after years of volunteering. Since then I've logged thousands of hours of live TV experience, presented the weather on CBC's The National, and appeared on ESPN3. More on that in a second.)

And I am burying the lede again. Today was my last day at The Weather Network. I have accepted a full-time position at Global TV Toronto (plus seven other cities across the country) as a weather and sports anchor. I will be based in Toronto and I will be on the 11 p.m. newscast from Wednesday to Sunday.

My first day is on Tuesday and I'll have more details before my first on-air shift on August 15.

It is bittersweet leaving The Weather Network. I am incredibly excited for this opportunity and to embark on the next phase of my career, but I am leaving a terrific team of people that I enjoyed working with each and every day.

In addition to my move to Global, there has also been some other developments career-wise. In May, I was once again hired by CrossFit to work as a sideline reporter for their West Regional competition. Click Demo Reels to see some clips from that event.

CrossFit was so pleased with my work that they hired me again to work as a sideline reporter for the Reebok CrossFit Games in Carson, California at the end of July. The events were carried live on ESPN3 and it was a tremendous experience to work such a large-scale production (I am currently putting together a demo of clips from my work at CrossFit Games that I will post when completed). 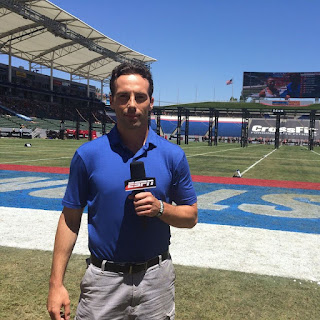 Also, back in April, I hit a milestone birthday. To celebrate the occasion, I performed standup comedy at Yuk Yuks Toronto. It has been on my bucket list for as long as I can remember. Check out the updated About Mike section for the video.

Thanks for continuing to follow my journey throughout the Canadian (and American) media industry!